A conversation with Magali Reus

Titles are quite precise in your work and are a constitutive element of each piece, of the different series of works, and of your exhibitions in general. The Candlesticks and Landings have a date or number in their respective titles, together with a name that almost sounds like a perfume. What’s behind these titles? How did you arrive at the title of the exhibition On Like Scenery?

I was drawn to that specific title because linguistically it suggests two (or more) readings, each of which I think speak and connect to the work in different ways.

First, one interpretation might be something ‘switched on’ – something active rather than ‘switched off’ – sleeping, mute. I am interested in the idea of works being ‘active agents’: animated, engaged forms and shapes, non-passive. Functional objects are often perceived as existing merely to be activated through use, or fulfilling a purpose or need for someone else. Instead, I am drawn to shaping forms or objects that dictate a will or attitude of their own. This doesn’t mean they’re necessarily unwilling or unrelatable to us but rather they may carve out a space for themselves to exist that feels less hierarchical.

The fact these are shapes and sculptural objects rather than human bodies also seems important because inevitably this makes them less constrained or restricted when compared to viewers’ physical bodies. It means they are, therefore, suited to hybridise or re-shape themselves more dramatically, more illogically or explicitly, and can transform into and beyond a space of camp.

Second, the title, read aloud, might be heard as ‘unlike scenery’, which speaks to an environment or setting that feels unfamiliar, that lies beyond what’s commonly expected or accepted, calling into question identity itself.

The motif on the back panel of the Landings photographs is a part of a drawing you made as a child. What made you go back to your ‘early’ work and include a naive representation of nature?

Set into steel trays, the staged photographs are mounted onto a ground of lightly faded beige hues. At first glance they could be the unselfconscious remainder of tile adhesive on a board rescued from a skip. These hues are cropped sections, as you say, of a childhood self-portrait. In this self-portrait I am pictured as the protagonist within a simplified and balanced rendering of a pastoral environment. The classical pastoral fascinates me because it is an idyllic state before capitalist exchange. It continues to be evoked today as an abeyance of complexity.

What made you decide to enter construction skips and (quite dramatically!) stage different fruits within the rubble? Do you see the way you frame the pictures, with small sculptural elements and inscriptions on the frame, as a form of staging?

Shot in macro detail [extreme close-up], the fruits are character portraits of sorts, which find themselves – sometimes exuberant, other times shy – posing among debris stripped from renovated homes. I was interested in the constructed image of nature, in this case the fruit bowl within our domestic spaces of consumption. Fruit, pictured in Landings, is structured by global logistics networks of commerce: agricultural, geographical, and financial markets are all integral (invisible) markers to the existence of a single piece of fruit in the transactional space of the supermarket. I think of these photo works as still lives of sorts: we could see the skip as the vessel, acting as an oversized fruit bowl.peach

In your work, I see an ongoing fascination for the weird consequences of uniformisation through globalisation. In this exhibition you examine, for example, our consumption of fruit and vegetables. At the same time, you have a deep interest in folklore and communality. This is most notably signalled with a breadboard in this exhibition, but you have also made work before with for instance roosters or a picnic table. Do you see globalisation and folklore as two ends of a spectrum, or as two forms of the same twisted relationship to nature?

They’re constantly being rearticulated through one another. And they’re not binary. Folklore is not necessarily what I’d like the work to speak of per se. Certainly, I am interested in folkloric objects and am greatly drawn to folkloric or traditional crafts. In the work Our Volumes I married the domestic Victorian breadboard and the industrial cable reel to consider the idea of communality.

During my first visit to Museum Dhondt-Dhaenens, prior to conceiving the works, I realised the surrounding context was an undeniable influence on how one views the works on display. Of course, there is its rural setting and the natural environment is framed and filtered by the museum’s windows. Equally, the journey to MDD from Ghent sets a tone: narrow, green country lanes lined with lampposts pass through scenes of the agricultural industry, village restaurants, and comfortable homes. Learning about the museum’s passionate and involved friends, most of whom live nearby, impressed upon me the museum’s foundations that are integrally supported within the local community.

Our Volumes invites thinking about the museum’s surroundings, as well as the idea of communal dialogue. It’s in fact the first work one encounters upon entering the museum and engaging with the exhibition. Its construction of a wooden, hand-carved 3-dimensional face takes the language of a carved upscaled breadboard. Its inflated size equally, however, suggests hosting a number of reoriented companion diners. Consuming bread as a nutritional element is millennia old and happens throughout the day in the western world: breakfast, lunch, and dinner. The sharing of a loaf – a ‘brick’ – requires it to be carved, sliced, sculpted, broken, or divided into smaller rations. I was thinking a lot about these actions as sculptural gestures.

Your work has the aesthetics of an industrialised process, but depends on manual labour, leading to unique crated pieces. Could you guide us through the fabrication method and the necessary steps of one of your works?

Describing the fabrication of a single work would take far too long, and make for quite a banal read. There are simply too many processes involved, which is also why the sculptures take such a long time to construct. To give you an impression, however, I could focus on an element within one of the works I’m showing at the museum – specifically the sheet, which we talked about earlier, onto which the photographs in the Landings series are mounted.

The graphics on the sheets derive from a self-portrait painting I made as a child, which I rediscovered while going through old memorabilia kept carefully by my mother. I scanned and re-drew this particular painting on the computer and made it into a vector file. These vector shapes were then enlarged, cropped and machine-cut into two-layer vinyl stencils. Each steel sheet was powder-coated white as a background layer, followed by the application of the stencils one layer at a time.

These coloured layers were applied by a specialist powder coater. Interestingly, I was able to do the spraying myself, often interfering with the otherwise conventionalised and highly industrialised practice of this process. Once the finished sheets arrived back in the studio, I went through the process of using an orbital sander to render the surfaces entirely flat, partially revealing some of their layered surfaces. Finally, I applied wax by hand on their top layers to create a veneer that gave the colours a more palpable presence. Once this was completed, the photograph would be mounted on the sheet, which would then be dropped and mounted into its constructed frame.

You chose five works from MDD’s collection as part of your exhibition. Why did you single out these works and how did you arrive at the scenography?

installatieMy selection was based on my thinking around the exhibition as a totality, grounded on ideas around the domestic display of fruit and vegetables. I took the common fruit bowl as a vessel for display as a starting point because of its multiplicity of references: aesthetic, art historical, social, geographic, and political. I found that the domestic display of flowers in vases within the private sphere operates in much the same way.

The selection of paintings from MDD’s collection was therefore based not only on the fact that they are by Flemish painters, historically connected in one way or another to the museum’s surroundings (the painter Léon De Smet for instance was part of the Latem painters’ community), but also because of the works’ depiction of domestic settings or displays.

In each of the paintings there is a kind of still life with foods or floral arrangements. Some are tucked far into the background: in De rode kast by Louis Thévenet, two bread loaves are stacked beside a pair of cups on a small sideboard. In Vaas met bloemenby De Smet, an abundant floral still life is the focus on a round carpeted table.

Let’s not forget the cable reels you used to display the works.

Yes, the intention for using the cable reels as display mechanisms for the paintings, which are carefully inlaid into their outer surfaces, was not solely because of the more obvious connection to the Our Volumes sculpture at the entrance. The cable reel shape held additional possibilities for connecting the paintings to the other sculptural and photographic works in the exhibition. A double-faced reel unexpectedly reveals on its reverse side an inlaid Thévenet painting almost upside down. The painting, De rode kast, features a drawer left carelessly open. I was interested in how this slight gesture subtly mirrors the apparently careless and exposed positioning of its wooden anchor.

The reels, acting as receptacles of sorts, enabled the paintings to gain a more physical, sculptural presence. Their roundness, too, suggested the potential for becoming more ambulant and animated, rather than conservatively anchored to white walls. 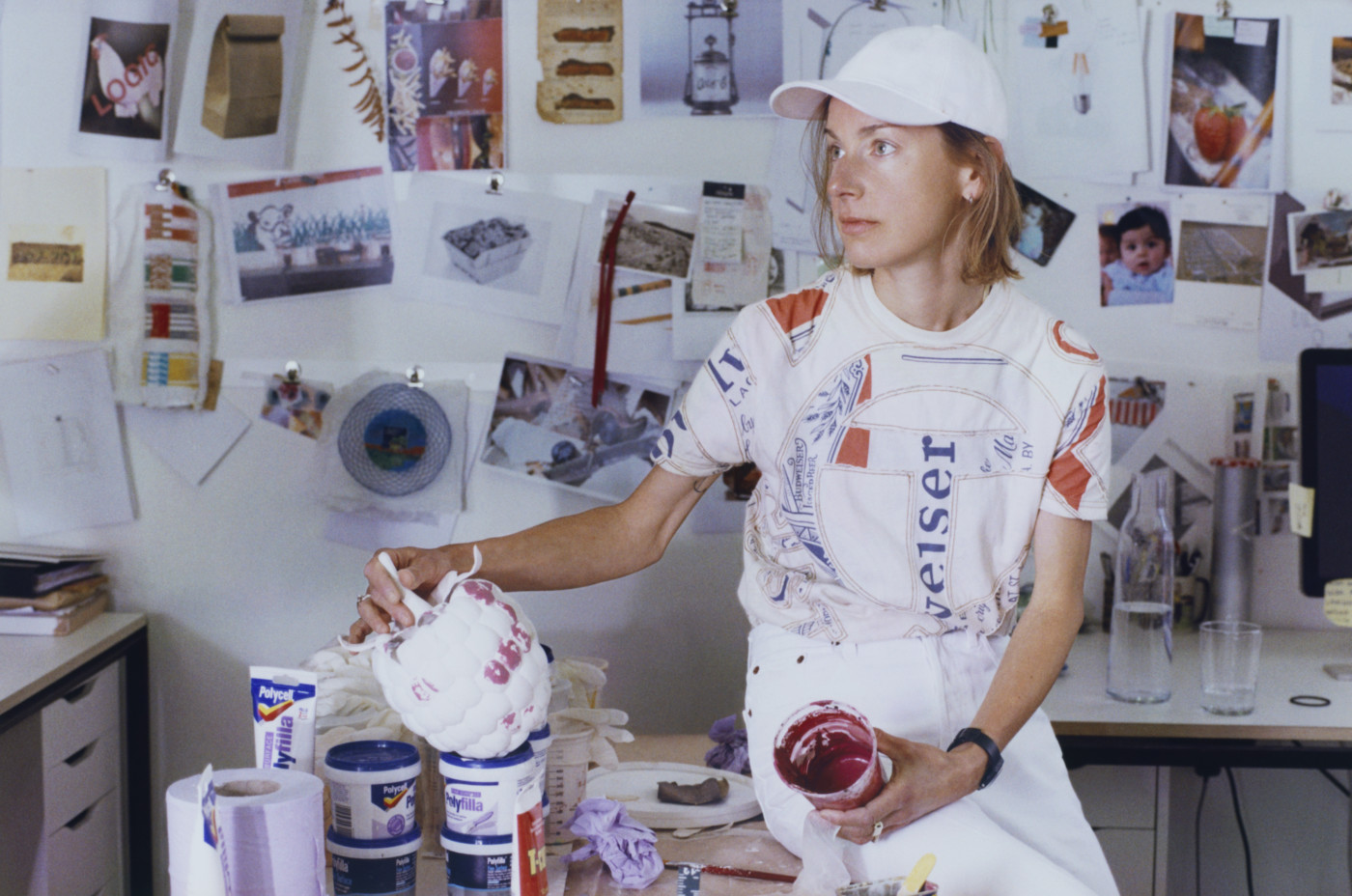 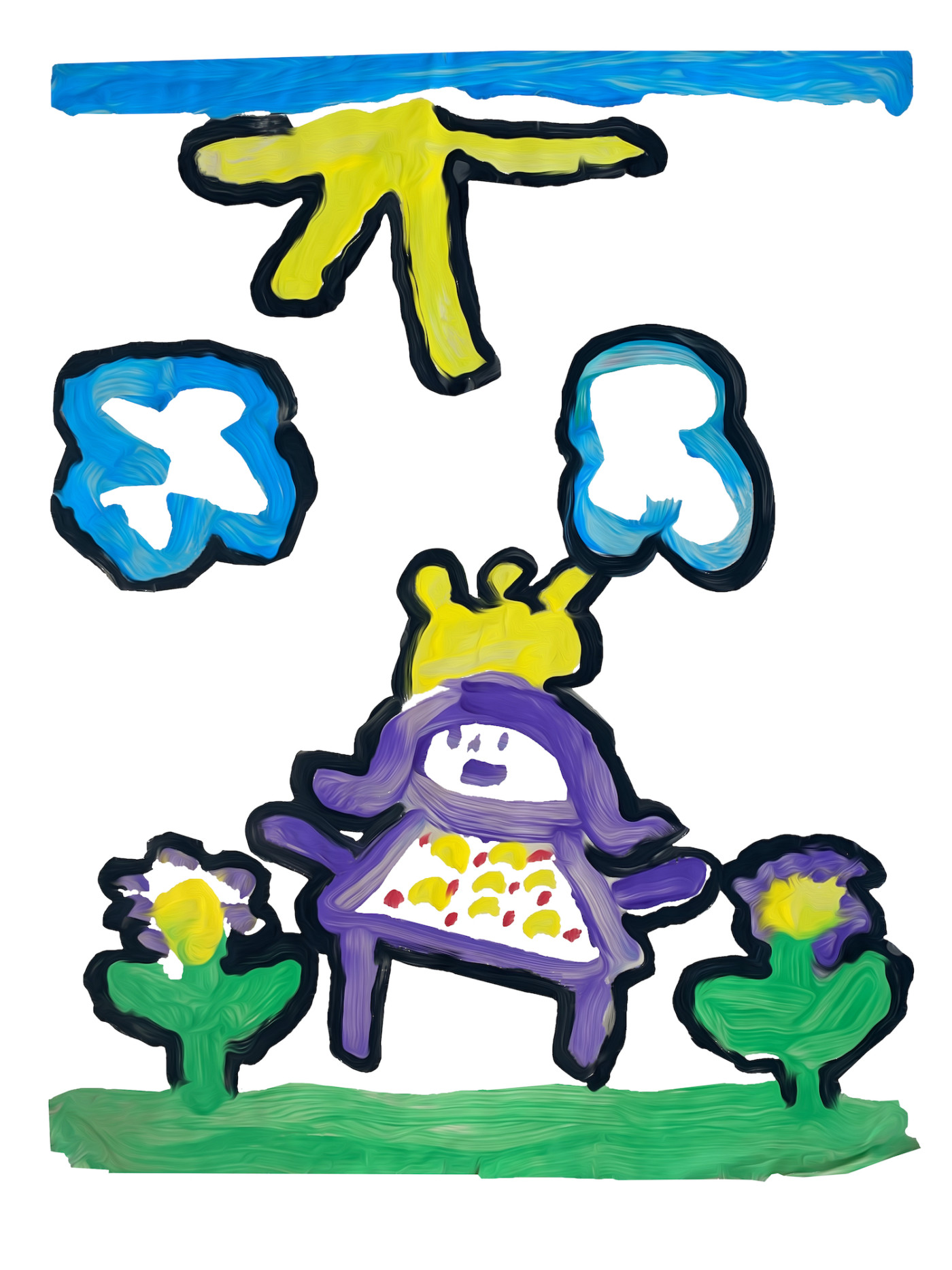 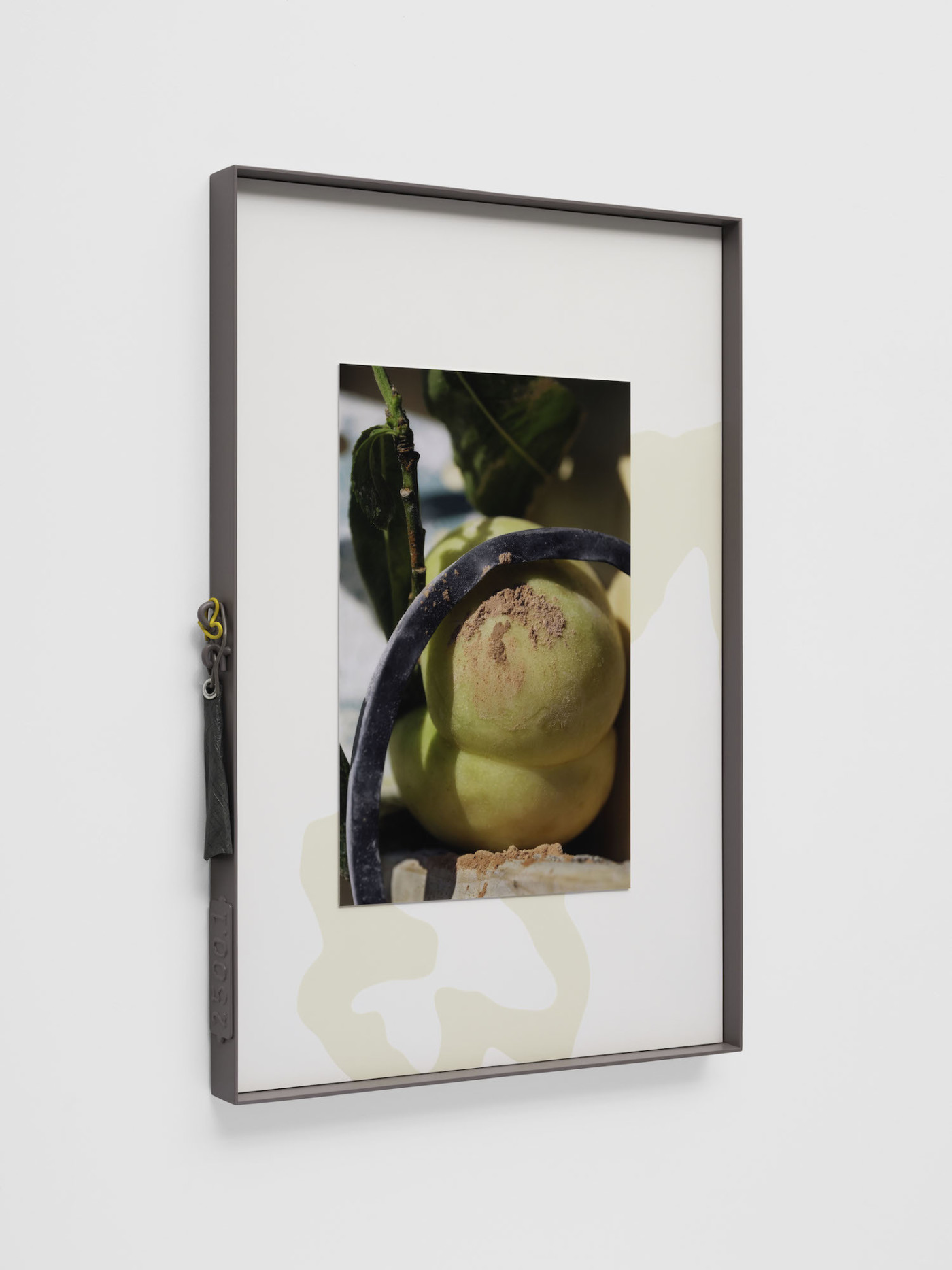 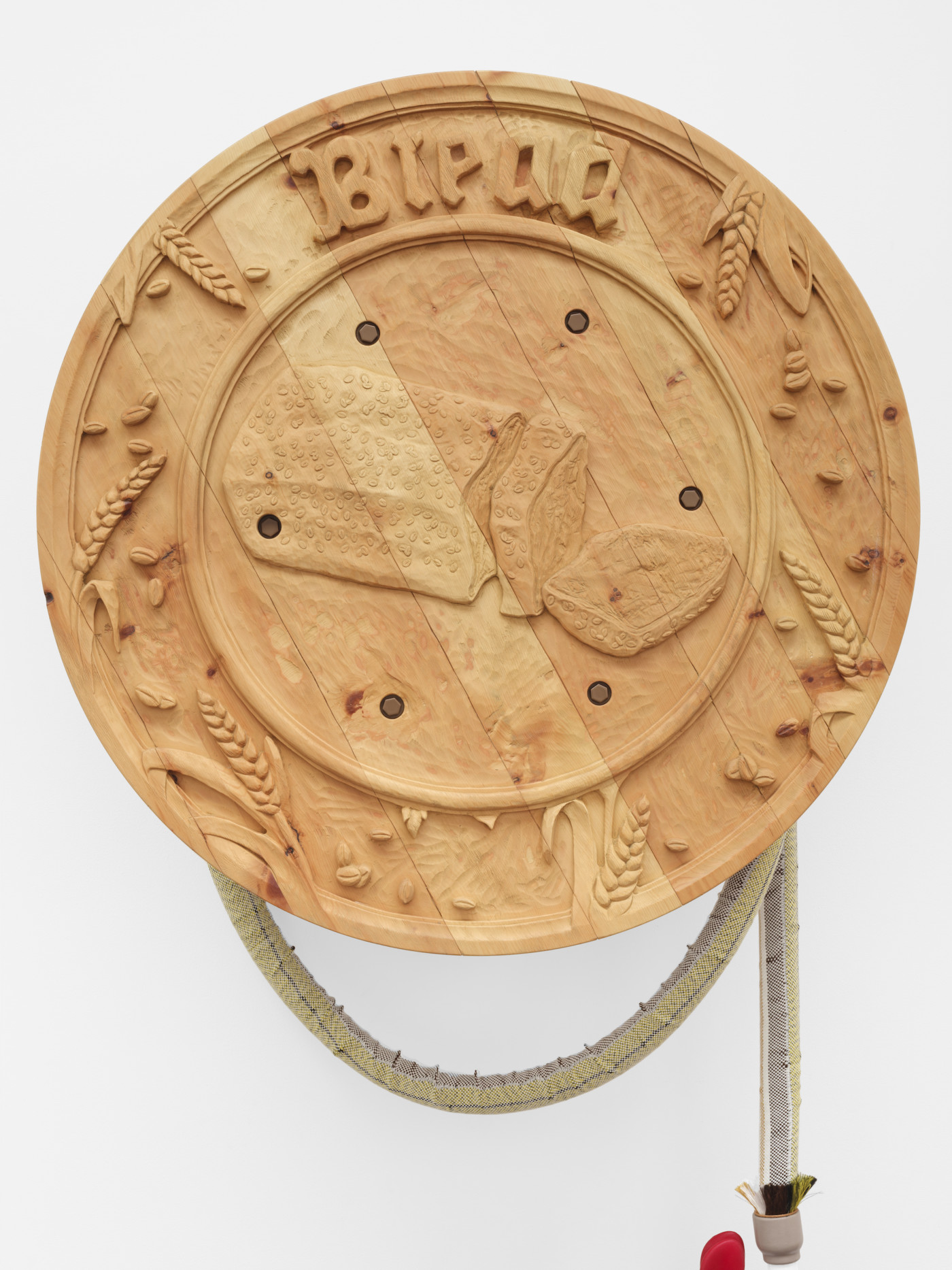 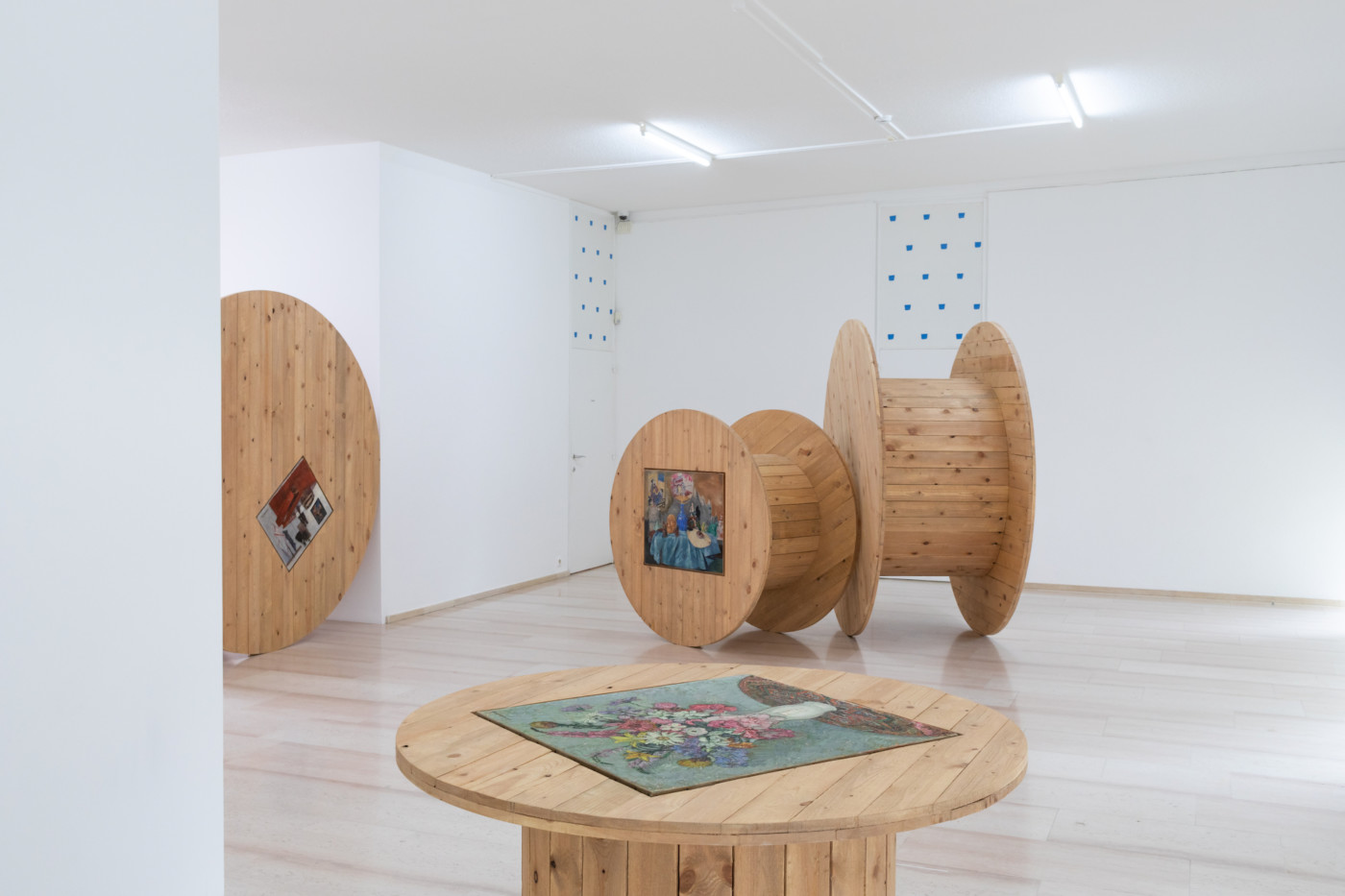 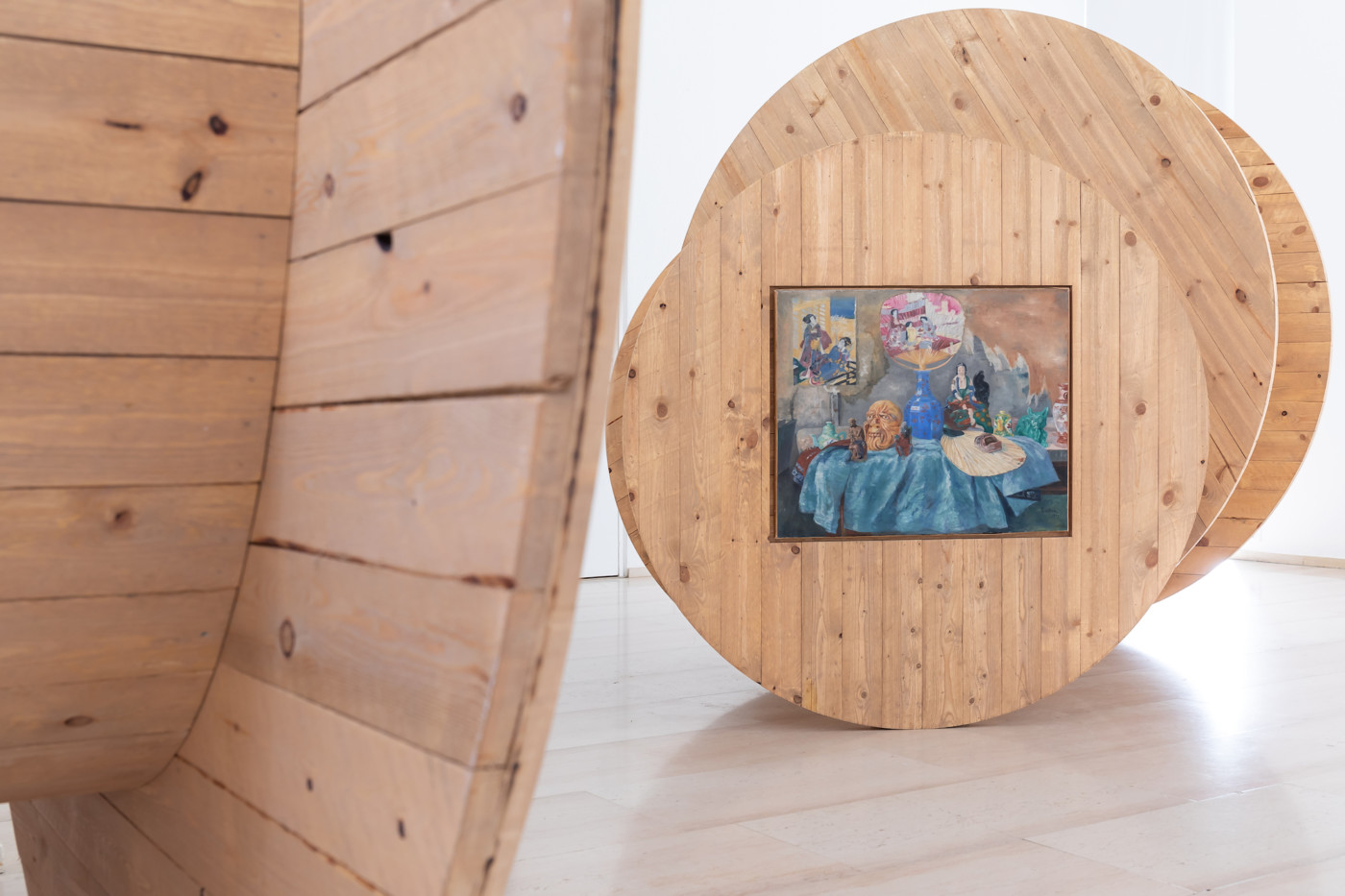